I’m back home from my quick work trip and boy do I miss it! Work doesn’t quite seem like a chore when blue beaches are staring at you even as you stand in the court building. I had to take a pic from my iPad when I was leaving because the water just looked so yummy! Anyway today I thought I’d do a fun Random facts about me tag that’s been going around. 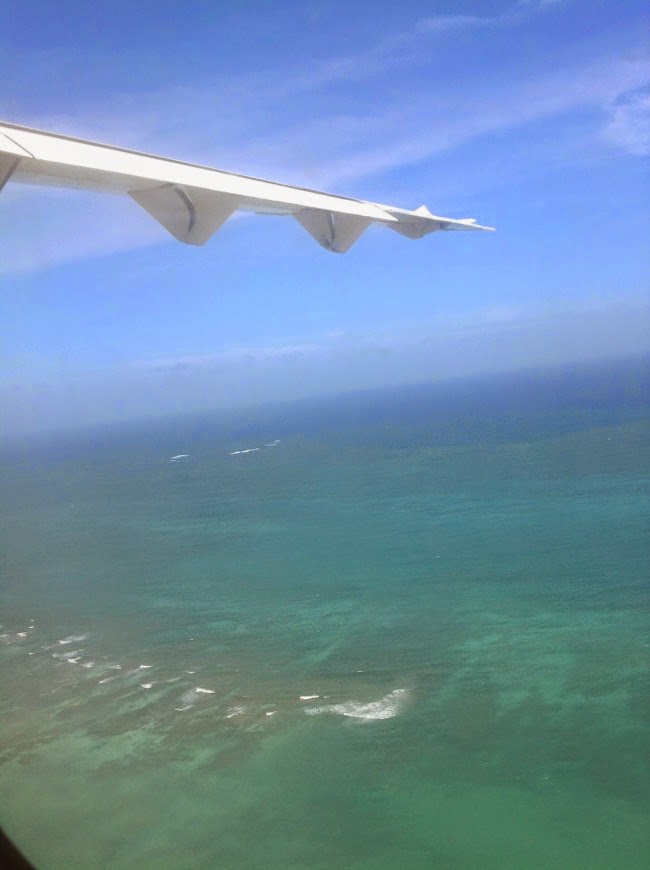 1. When I sneeze I sound like a small injured animal. Its the most high pitched sneeze ever.

2. I have the shortest toes ever. My little toe is tiny.

3. I have a doggie named Caesar but he lives with my parents because my apartment doesn’t allow dogs. I have tried to fight this case … I will continue to try haha  🙁

4. I’ve always wanted 4 children. But, there is a catch! I want 4 SONS! If I were to have a daughter first or second, the number of children I want drops to 2. I just don’t think I can mentally handle more than one or two daughters so I wont ever chance it. (Can you blame me though? I only went to girls schools and I have no brothers).

5. My favourite fruit is watermelon.

6. I have the same cell phone number that I’ve had since I first got a cell phone at 16 years old.

7. I can live without chocolate or sweets but juice … Juice, I struggle with giving up.

8. I have weird eating quirks. I don’t drink milk but Ill eat some things that contain milk; I don’t eat tomatoes but Ill eat ketchup (once it is already on something … ketchup by itself? *gag*).

10. I love basketball (I’m watching Game 2 of the finals as we speak)

11. I used to be able to really sing. Acid reflux took care of that. If I sing too high or for too long, Ill lose my voice. So I don’t sing.

1.  How long have you been blogging?

I started in February so I’m in my fifth month. Not long at all.

2.  What is your favourite part about blogging?

Cliché but most definitely the people.

I do love where I live but if I had to move it would be to London (love, love, love) or NYC. My lovely sis lives in Australia and while I’m excited to visit I couldn’t live there because its sooooo far from everything and everyone I know.

WOW of all time? I can’t answer this I watch too much TV! I used to love Fresh Prince of Bel Air when I was younger.

Dogs. They are more open to cuddles and wild play. Cats are too moody.

6.  What is your favourite season?

8.  What do you think is the best and worst thing about being a woman?

Best thing: The ability to grow and carry tiny humans inside of us

Worst thing: Every month our bodies feel the need to remind us of that fact. Touché lady parts, touché.

9.   If you could have dinner with anyone, dead or alive, who would it be?

hmmm … Ill have to think about it.

10.  If you were given the opportunity to go back in time and change one thing in your life, would you?

I know I’m supposed to say no way I love everything, life is splendiferous and yada yada. But I don’t believe in bullshitting my readers so yes if I had the chance I might go back and fix/change a couple things even though I have a lot to be grateful for. I’m human.

Coke but I don’t hate Pepsi.

And that’s it for the questions!

I’m also supposed to nominate 11 bloggers and give them in turn 11 questions to answer. I know however that a lot of these ladies probably have already received this award. Soooo instead I’m just going to list 11 of my fave ladies and Ill ask that you go check them out and maybe drop them a line.

Have a good one guys!!